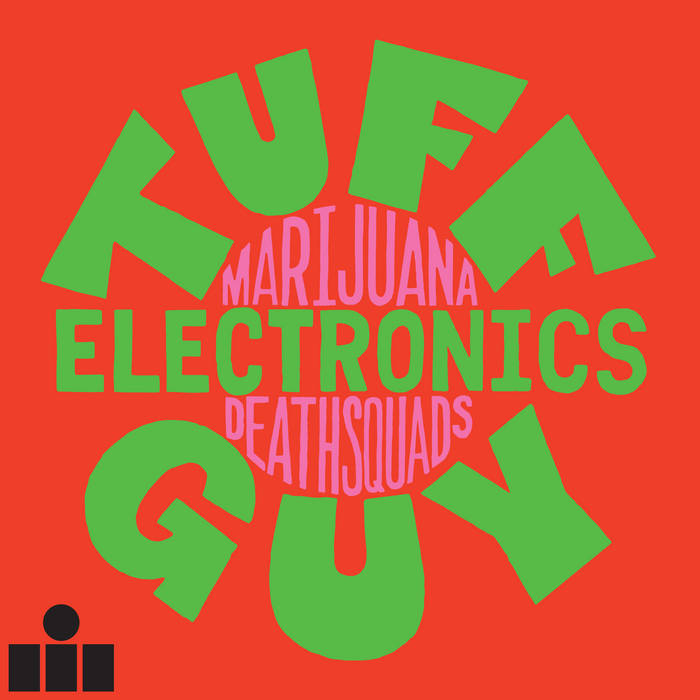 Marijuana Deathsquads’ Tuff Guy Electronics is the first new music that the Minneapolis centered collective has released since 2013. It simultaneously sounds like a heavily digitized ride on the motorik highway and a droll stroll through the apocalypse, the kind of music only people with conceptual talent to burn (and an inherent desire to touch that flame) choose to envision. It’s a pop-avant-garde paean to the space between an abstract higher power and the creative open road — full of primal groove and techno subtlety, but beholden to neither. If you claim Marijuana Deathsquads to be the Midwest’s answer to Boredoms (or at least F*ck B*tt*ns), they probably wouldn’t mind the compliment.

Though the Deathsquads line-up on Tuff Guy Electronics is — as has always been the case — a loosely defined and mutating structure, its core consists of long time Marijuaners Ryan Olson, Ben Ivascu and Isaac Gale; with first-time smoker Trever Hagen also heavily involved. These names are constants amidst a blur of bold-faces (Justin Vernon and Alex “Boys Noize” Ridha), secret heroes (drummers Greg Fox, Chris Egan and Freddy Votel, fine artist/ambient guru Eric Timothy Carlson), and a growing army of talented musical thinkers, many of whom play with Bon Iver, Gayngs, Polica, Har Mar Superstar and a host of other bands in Minneapolis’ cross-pollinating musical scene.

The album was predominantly recorded during a residency at Pioneer Works, the artist retreat/studio/gallery/venue located in Brooklyn’s secluded Red Hook neighborhood; at Funkhaus, the legendary recording palace built by the East German government and recently refurbished in Berlin; and throughout Minneapolis. It is a collection of late-night head-nods, comedowns and might-have-beens. Or as one of the song-titles here, puts it pretty succinctly, “Ain't Been Right Since That Party.” Yup, that!

Electronics is also a staggering pastiche of power and glide, and throughout its 32 minutes, it splits that difference – at times track by track, at times within them. “Last Sunny Day” is an epic evolution, opening with a trance-like processional at the end of the world, before exploding into a drum circle that at least contemplates an affirmation of life. If “Party” opens with the noisy, heavily processed heat of faraway suns burning, it descends into a lo-fi, industrial-pop bad trip. “O No” moves on symphonic pop-hymnal chords in the direction its lyrics dictate, from the serenity of “a strange and beautiful dream” to an attack by vengeful cops — and sounds like the best Flaming Lips song in more than 20 years. And the closing “Where That Wild Thing Is?” is another epic, a kitchen-sink approach to rhythm and composition, the kind of track that could have been conceived in one psychedelic sitting or by a thousand cuts over years, and we’ll never know the difference. As expected with this mostly testosterone-fuelled affair, there are also Tuff Guy noise asides throughout.

Bandcamp Daily  your guide to the world of Bandcamp